Cry out for peace, silence the guns 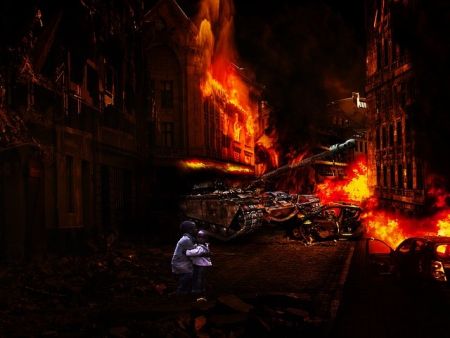 Call for a global ceasefire As the pandemic spreads, UN Secretary-General António Guterres has appealed for “an immediate global ceasefire in all corners of the world”, speaking in a live internet broadcast on 23 March. We asked “Communion and Law” director Adriana Cosseddu, Professor of Criminal Law at the University...

Call for a global ceasefire

As the pandemic spreads, UN Secretary-General António Guterres has appealed for “an immediate global ceasefire in all corners of the world”, speaking in a live internet broadcast on 23 March. We asked “Communion and Law” director Adriana Cosseddu, Professor of Criminal Law at the University of Sassari, to explain the significance of this appeal.

We’re in a new and unprecedented battle against a faceless common enemy, identifiable by the codeword: COVID-19. The mass media is pouring out updates, but one story which may have passed us by, shines out like a light at the end of a dark tunnel.

It’s the appeal by Secretary General of the United Nations, António Guterres, broadcast live on UN Web TV  during a virtual press conference on 23 March, calling for an immediate “global ceasefire” in all corners of the world! He appealed to warring parties to pull back from hostilities, put aside mistrust and animosity.  Now is the moment, he says, to silence the guns, airstrikes and artillery in order to open “precious windows” for diplomacy and negotiations.

Already on 19 March, the UN chief was urging world leaders to work together, especially to protect the most vulnerable. The human crisis which is unfolding requires solidarity in the face of a social fabric badly torn by this unprecedented kind of war, where hospital wards are the new trenches.

Coronavirus is the name of the new enemy bringing fear and threatening the whole world. It does not match the usual definition of an “enemy” in the history of humankind. This one is invisible, little is known about it, even in the world’s top laboratories. It claims victims at such a rate that health systems are overwhelmed and unable to offer safety or reassurance. It does not recognize nationality, ethnicity or religious identity. It knows no borders or frontiers. This is why António Guterres reflected, “the fury of the virus illustrates the folly of war”.

His words can be seen as shaping the alphabet for a lesson we all have to learn. “It is time,” he says in his appeal, “to put armed conflict on lockdown and focus together on the true fight of our lives.” The vocabulary of this war is being transformed. Although it is a ‘battle’ to overcome the virus, the weapons are very different.  Instead of bombs and air-raids, the usual instruments of death in wartime, here we’re talking of gloves, to touch the afflicted patients with care and attention; of masks, to permit people to approach one other while preserving each other’s protection and wellbeing; of respirators to support life;  of the professionalism of those who care to the point of giving their own lives for someone they don’t know but yet “recognize” as their brother or sister.

What a contrast with the countless innocent victims, women and children of the many, many conflicts which are not even being mentioned on the world stage, but suppressed by powerful economic and political interests.

This appeal from the world’s highest international institution is to take on the responsibility to activate appropriate health care especially in the most afflicted and war-ravaged countries, and create corridors for life-saving aid.

Today, the invisible enemy which no-one expected, is teaching us a lesson we won’t find in any history book. It’s the lesson taught by those ready to give their lives, those who act like candles which are consumed to provide light, who freely illuminate the lives of others. It’s the lesson taught by those who don’t forget the many migrants and refugees forced to flee, who continue to give voice to those who have lost everything, family, work, home and homeland seeking refuge and welcome but often encountering rejection and violence.

It’s the lesson teaching us to listen to the least privileged on this earth, disfigured by torture, stripped of dignity and exploited, victims of unspeakable violence and abuse.

The latest appeal from the United Nations calls all this to mind. We are reminded that behind the numbers generated around COVID-19, there are individual people, personal stories, human lives, everyone of which is a unique and irreplaceable ‘word’ spoken to humanity.

In this our Via Crucis of humanity, just as Jesus met Veronica, a woman whose story was unknown to him but who was able to wipe his suffering face, we too can respond to the voice calling out to “fight the disease that is ravaging our world” by “stopping the fighting everywhere. Now. That is what our human family needs, now more than ever.”

Our attention is being drawn once more to those words written in December 1948, in the aftermath of the Second World War, in the Preamble to the Universal Declaration of Human Rights: “the human family”. The human family not as a verbal formula but as a living reality, brought to life by our links of fraternity and proximity. So just as the sunrise displaces the darkness of the night, now we too have the possibility to look at one another beyond our distances, with “resurrection” in our eyes.

What can we do?

We can make our own commitment to spread:
a culture of responsibility, knowing how to take on other people’s burdens,
a culture of legality, respecting the person,
a culture of peace, starting with repurposing factories producing arms and military technology.

We join in the shared commitment of all who, in the name of life, health and work, raise their voices to build a world of true peace:

working towards a more united world

A permanent international observatory to make all the different fragments of fraternity visible .

It is a way to get to know the different activities done on a global and local scale and be engaged in building a united world.

Pathways for a United World

This work is licensed under a Creative Commons License and made with Free Software released under the GNU/GPL License.
Webmaster - This email address is being protected from spambots. You need JavaScript enabled to view it.